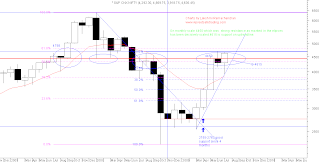 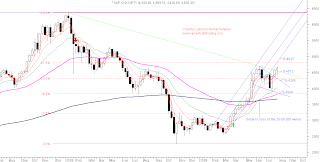 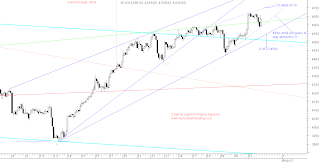 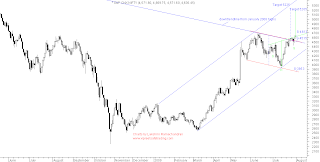 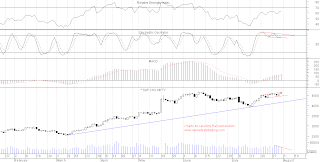 
On week ended 17thJuly I wrote, "We are once again in the perplexed state whether markets will move up or down. This is the reason we follow price with stop losses instead of making these difficult predictions about the future. Remain long with a stop loss of 4200 for targets of
Two weeks later we are yet to achieve the last two targets. The price action meanwhile has also thrown up a technical target of around 5100-5200. Let's check out the hurdles if any, on the path to achieve it.
Momentum

Moving Averages are bullishly aligned on the short and intermediate time frames.Long term (monthly charts) have yet to confirm.


Considering all the above points, one can look for oppurtunities to go long with a stop loss of 4300.

Good to see the change in the charts..

Try to make like our VFM EOD charts where it's in the centre and big letters.

Try to place your signature as a background to the charts if you application permits. Placing in either corners make it easy to erase.

thanks to copycats will learn to do these things by tomorrow

These charts do have the signature. But I would have liked two things to trouble the copycats:
1. your name/website to appear in "Larger Font"
2. The name/website appear in somewhat transparent fonts.

That would make it impossible for other to copy without significantly distorting the charts.

Your attempt in putting blog address is appreciated, however a proper watermark may be inserted similar to one appearing on VFM chart, will make the copycat to sweat.