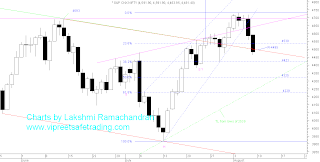 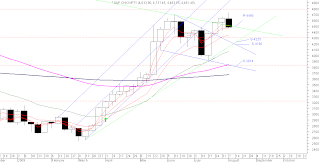 
Last week we had three targets on the upside to achieve.
Nifty achieved the first target of 4693 with ease but the moment this was achieved it was a laboured attempt to move higher. Conviction was more towards a retreat than a rise.

Moving Averages are bearishly aligned on the intraday charts. Daily and weekly charts are bullishly aligned.

Well, the correction did come furiously on breaking the rising wedge. As of now,
The trendline joining March lows at 2539 and July lows of 3918, shown in green, offers support for the week at 4250 to 4325 for the week. Holding this trendline will keep the bullishness of the upmove alive. One can look for oppurtunities to go long keeping these levels as a stop loss.