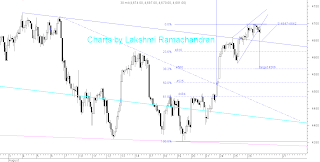 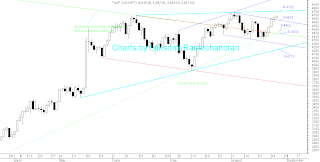 Nifty moved in a 37 point range all day , making a higher high and a higher low, keeping the bullishness intact. Shifting the stop loss to 4582 was comforting as there was a good amount of volatility within this range and the forming of a rising wedge on intraday charts threatening a breakdown. The negative divergences on half hourly charts added to the possibility of a correction.

On half hourly charts the rising wedge has been broken giving a downside target of 4566 which coincides with the 38.2% retracement level of rise from 4353 to 4697. Bouncing from this level would be a bullish sign.

Daily charts show an improvement . The negative divergences have disappeared. The Macd is in buy mode. The stochastics has reached overbought region but still strong and in a buy mode. The upper trendline of the falling channel from which Nifty broke out, has strong support at 4625. Resistance comes at 4725 on the upper trendline of the rising wedge.

The candle formed on the Sensex (which is more accurate, as in the Nifty the previous day's closing price is always taken as the opening price for today) is a doji indicating hesitation to continue the ongoing uptrend. The rising wedge is also depicted much more clearly on the sensex. Fall in volumes , which is an important characteristic of the falling wedge is shown on the charts and confirmed by the OBV.

Watch out for the resistance of the upper trendline of the rising wedge at 4725.

thanks a lot mam

U have given target for raising wedge, what about the status of falling wedge target of nearly around 4800 levels? Is it invalid now?

As now nifty is nearing 4700 levels if any false breakout happens around 4750/80 level means so we have to take the falling wedge target is achieved?