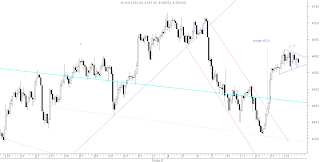 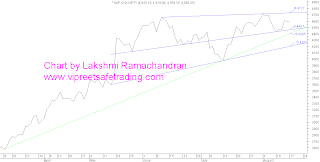 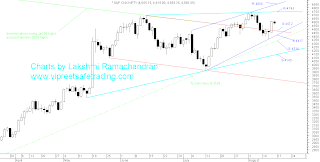 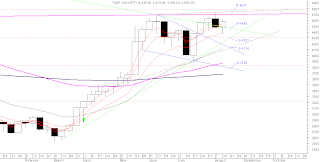 As of now, The trendline joining March lows at 2539 and July lows of 3918, shown in green, offers support for the week at 4250 to 4325 for the week. Holding this trendline will keep the bullishness of the upmove alive. One can look for oppurtunities to go long keeping these levels as a stop loss.

The Nifty made a U turn from 4359 as analysed and retraced 70% of the fall by end of the week, supporting the view of buying on the dip. Has the scenario changed in any way?


Moving Averages are bullishly aligned on all time frames and in favour of climbing the wall of worry.


View
Indicators are not in sync with each other indicating we are very much in a fluid state.
At the moment being a chameleon will work the best. Since we have a bearish and bullish pattern in contention, it is difficult to be a bear or a bull. One must trade with strict stops as between 4350 and 4731 it is a ranging market whipsawing traders without mercy. Till the Nifty breaks out of this range or from one of the patterns discussed above , trading will be difficult as a diehard bear or bull.

Pssssst --- My vote goes in favour of the bears.