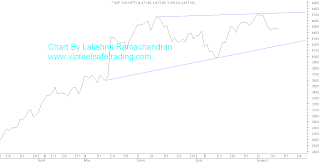 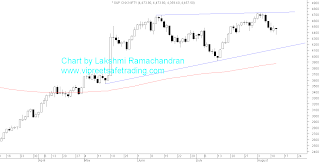 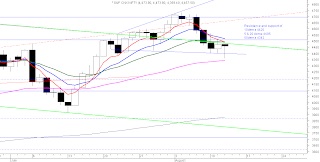 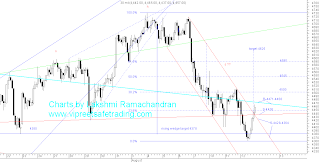 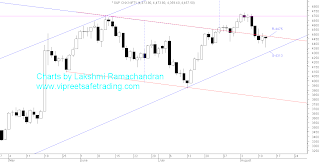 Daily Chart
By today's action a bullish hammer was formed and the rising wedge target of 4378 was achieved. Strong support levels held though attempts to push down prices continued for most part of the day. However the close could not scale the upper trendline of the channel which offers resistance at 4475 for tomorrow. It is important to close above it else the possibility of testing lower trendline is high.The Daily oscillators are not indicating strength, the Advance Decline figure was marginally negative and volumes were below average.

The half hourly charts show the fall from 4731 in a channel and we have broken out of it today giving a technical target of 4625. The breakdown from the neckline did not last long and the recovery was with positive divergences in the half hourly oscillators.

The trend will turn mildly bullish once the 4510 level is overcome and sustained.Technically the low of the hammer should be strong support. Tomorrow's candle will tell us more.

The action since May 17th has formed a rising wedge which I have shown on line as well as candle charts . Line charts depict the formation much better. This has very bearish implications. The mild bullishness as of now should be a temporary pullback which should then culminate into a fall again breaking the rising wedge downwards for a target of 1200 points from point of breakout (high point 4731- low point 3537 = 1200).

Resistance and support levels are marked on the charts.

THANKS A LOT MAM

rising wedge..bearish implications ..tgt 3880..i fully concur..neo waves too project such a break down after the current pullback in progress..i enjoy and enrich myself reading ur views.many thanks.

as of now i am short in nifty at 4555.should i cover my position.

I like to trade with stop losses and dont like to know whether we are in new or old bull or bear run. following price is more sensible. You could keep a stop loss of 4735 on end of day basis depending on the risk you want to or are able to take