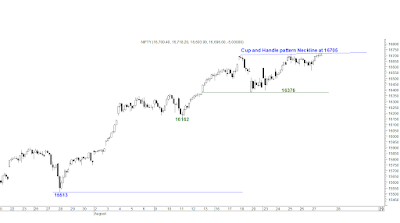 Nifty hovered around the 16700 area and closed just above it.
The half hourly chart shows a bullish cup and handle pattern and staying above it's neckline of 16705 will have a target of 17000.
follow me on twitter http://twitter.com/#!/lucksr
Happy Trading !!
Lakshmi Ramachandran
Posted by Lakshmi Ramachandran at Saturday, August 28, 2021 No comments: The weekly candle shows  a rather undecided and confused market leading to selling at highs. The support line of the blue rising channel worked as resistance.
Daily Chart

The target of 16700 was achieved ! Selling soon after is a normal phenomena which found support in the minor resistance area of 16375. Holding this area and closing gap made at 16510-16569 will see attempts to move up again else the downward move should continue.
Hourly Chart

The upmove from 16513 is over as shown by break of the red uptrendline with a gap down. Supports and Resistances marked on the chart.
follow me on twitter http://twitter.com/#!/lucksr
Happy Trading !!
Lakshmi Ramachandran
Posted by Lakshmi Ramachandran at Saturday, August 21, 2021 No comments:

Daily charts show an Island reversal.An island reversal is a price pattern occuring when a few days of trade is separated on either side by gaps in the price action. Till the gap is closed the trend should be weak.This is more clear on the hourly chart below.
Hourly Chart

Crossed resistance but only just ! Difficult to make a call about the immediate trend.
Bullish / Bearish levels marked on charts.
follow me on twitter http://twitter.com/#!/lucksr
Happy Trading !!
Lakshmi Ramachandran
Posted by Lakshmi Ramachandran at Saturday, August 14, 2021 No comments:

Nifty defies Newton's Law of "What goes up much come down". Difficult to be brazenly bullish. Would continue neutral startegies.
Would like to share Newton's experience with stocks which I read in WSJ
Prof. Odlyzko writes of Newton :

Newton was a financial pioneer. As master of the Royal Mint, he pushed the British government to migrate from silver to gold as its monetary standard, instituted exact weights and measures for coinage and sternly punished counterfeiters.

Newton was also among the earliest to spot the potential in the South Sea Co., the global trading firm that was seeking to restructure the growing debts of the British government. Newton began buying no later than June 1712, less than a year after the company was set up.

That was almost eight years before speculating in the company’s shares became a mania that swept up everyday investors and high society alike. The shares (quoted as a percentage of their par, or nominal, value) shot up from about 200 in March 1720 to nearly 1,000 in June and July, then crashed back below 200 in a few disastrous weeks later in 1720.

But the price of the shares went almost straight up immediately after Newton sold them, brushing 800 in late May and early June, 1720.

“As the bubble continued inflating, it appears that he panicked”. The great scientist, throwing his rationality to the winds, plunked £26,000 into South Sea shares on June 14, 1720, at a price of about 700 per share -- twice what he had sold them for only a few weeks earlier.

Even worse, in late August, with the shares priced about 750, Newton put another £1,000 into a South Sea security that appears to have been comparable to a call option giving him the right to buy shares at a price of 1,000 each.

At this point, Newton had shifted from a prudent investor with his money spread across several securities to a speculator who had plunged essentially all of his capital into a single stock. The great scientist was chasing hot performance as desperately as a day trader in 1999 or many bitcoin buyers in 2017.

Newton appears to have lost as much as 77% on his worst purchases, or at least £22,600.  That’s the equivalent of £3.1 million, or nearly $4.1 million, in today’s purchasing power. Overall, he lost at least a third of his account value.

The words often attributed to Newton were ascribed to him years after his death, so the great man might or might not ever have said that he “could calculate the motions of the heavenly bodies, but not the madness of the people.”

But surely the author of the law of universal gravitation must have learned the First Law of Financial Gravity: What goes up must come down, and what goes up the most will come down the hardest.

Bank Nifty made a bullish move during the week but fell short of closing above the previous 35985 level. This keeps one guessing whether the bulls are strong enough to continue the upmove. Momentum too is not supporting the upmove.
Breakout from the 34000-36000 levels with momentum is required to set a trend.
follow me on twitter http://twitter.com/#!/lucksr
Happy Trading !!
Lakshmi Ramachandran
Posted by Lakshmi Ramachandran at Saturday, August 07, 2021 No comments: