Sharing What I read

Governments and central banks have reacted to the crisis in what they view is the correct manner, but, in my view, it is an artificial manner, and they are only making the crisis worse. The reason it is stretching out as a problem is that they never let the problem cure itself.
Problems always come no matter what governments say and we have always had slowdowns in America after every six or seven years even in good times. Be very worried because the next time around, things are going to be much worse, especially in countries where the debt is much higher.
India should have had the greatest tourist companies in the world. If you can only visit one country in your life, my goodness, it should be India—it is an astonishingly spectacular place to visit. There is no place that has the depth of culture that India has.
The government goes from one mistake to another—no matter what the controls are, no matter how much the debt keeps rising, Indian politicians are only looking for scapegoats. Look at the latest thing with gold—Indian politicians want to blame the problems of their economy on someone else, and now it is gold.
India should have been among the world’s greatest agriculture nations—you have the soil, the people, the weather, but it is astonishing that you have not become one—it is because Indian politicians, in their wisdom, have made it illegal for farmers to own more than five hectares of land.
In 1947, India was one of the most successful countries in the world relative to others. Even as recently as 1980, India was more successful than China, but then you know how that story turned. It was more successful than South Korea, more successful than most places in Asia—but, for me, it is unfortunate that you have failed to take advantage of some of your most valuable assets.
India has some of the smartest people in the world, but it does not have an education system to support it.
There are not many successful Indian companies, outside those that are associated with the government. Look around in Singapore and you don’t see many Indian products, except for some restaurants. There are very few Indian brands that you would recognize outside India. In India, many of its companies are successful because of their links with the government. Apart from a couple of software companies, I literally cannot think of Indian firms who have made it big in the international scene.
There are millions of entrepreneurial, driven and smart Indians, but most of them want to be abroad because they know that unless they are involved with the right people in India, they are not going to be successful.
All growth rate figures are unreliable. It is stupefying to me that India could claim to have a clue to what is going on even in India, much less in China or in the US. If you go back over the last few years, you will see the Indian economy, as per the numbers its government has put out—some of the numbers its government has projected—are comparable with those of China. Then you go see both countries and you’ll realize something is wrong. If India’s growth over the last couple of years was comparable to that of China, where are the schools, the highways, the infrastructure, the housing, where has it all gone?
If India curbs its gold imports, will its economy be back on track? There is no question that if you have money, it is better to invest it than put it into a stagnant asset—according to this argument, women should not buy dresses or shoes, or we should not be buying houses…the one billion Indians are smarter than the market and also the government. If they see that they are better off putting their money in gold, that is what they will do—the solution is not a ban on gold (import), but to make the economy exciting enough to make people want to put their money into other things
Compared to many of the countries globally, India was on top in 1947, but relatively India has only declined since then. Remember that you move from dictatorship to oligarchy to democracy to chaos—may be they will throw out these absurd oligarchs who rule India and then it may have a vibrant democracy and regain its proper place, its historic place in the globe.

Nifty Reverses with the Outside Day Pattern 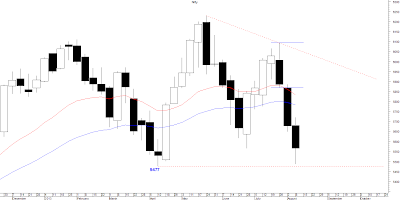 The Outside Day pattern identified two weeks back reversed the uptrend as per it's character.Two week's of unabated fall retracing the upmove from 5566 in shorter time ! This shows selling pressure and the Nifty may experience some more damage.Buying strength close to 5477 low may lead to a pullback which should find resistance at the 40 & 20 Ema and the downtrendline from 6229.


Write to vipreetsafetrading@gmail.com  to subscribe to the daily analysis of Nifty and Bank Nifty