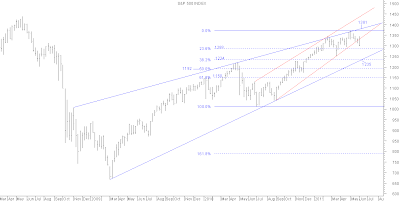 The weekly candle was an Outside candle pattern  breaking down decisively from the uptrendline drawn from September 2010 lows. This is bearish. Oscillators have broken the lows made on 18th March 2011 after showing negative divergence. Corresponding low on the S&P is at 1249 which now will be vulnerable to being broken. Supports on the way down is at 1288-1235-1192-1150. 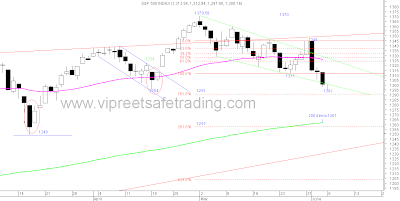 The channel breakout on 31st May proved false and now the S&P500 has broken below it. The 50 dema too has been violated decisively. Chances of the 200 dema getting violated is high. Support from the 200 dema is at 1261. Stochastics has reached oversold positions so fresh short term shorts need to be careful. Supports marked on the charts.