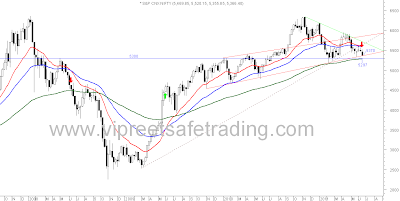 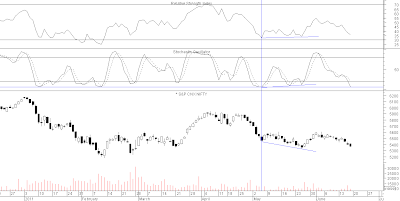 Last week's positives remain intact.The assumption that selling was waning proved wrong. However the volumes still  remain low showing bears lack conviction.
Support taken exactly on the red trendline joining lows from June 2009. Support for next week on this trendline at 5370. Supports around the 5300 levels available in plenty-- 100 dema, previous resistance/support as shown by the blue horizontal line . Refer to the charts in my earlier weekly post about this level here --http://vipreetinvestments.blogspot.com/2011/05/reigning-nifty-weekly-update-28th-may.html

Till 5300 holds sudden recovery efforts by bulls could happen. Chart II shows stochastics has reached oversold levels which normally leads to some recovery. No positive divergences  as yet so any pullback should be shallow.