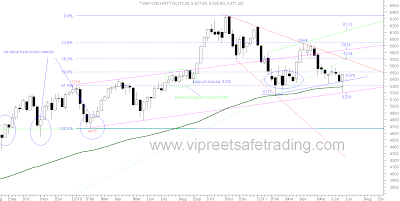 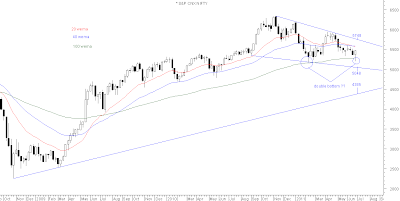 Weekly Charts show a hammer - long lower shadow with a small real body closing at the high with no upper shadow - which is bullish. Volumes were average but much larger than the last two weeks which is heartening as the fall was on lesser volumes than the rise.The close was exactly on the pink trendline from 4675 lows and the close exactly on the blue trendline from 5177. The 100 wema was violated intra week but bounced off it to close well above it.

The 20 and 40 wema continue in sell mode.The trade remained below the uptrendline from March 2009 for the sixth week.Lower high lower low maintained continuing with the negative bias.

Till a higher high higher low candle is formed the bias will remain negative.Chart II shows a potential double bottom at 5177 - 5196.Confirmation on scaling 5944. First confirmation of reversal  on scaling 5604.