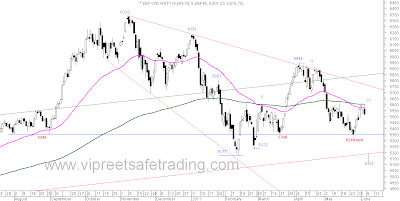 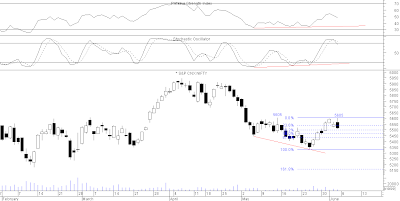 The candle on the last trading session was an Outside day , a one day reversal pattern, which supports the topping of the right shoulder of the bearish head and shoulder pattern.The outside day shows a tug of war between the bulls and bears with the winner being declared by the direction of the close. Friday's candle was outright bearish as the open was with a gap up which finally led to a meltdown after registering a new high for the rally from 5330. This clearly shows the bears had the upper hand. 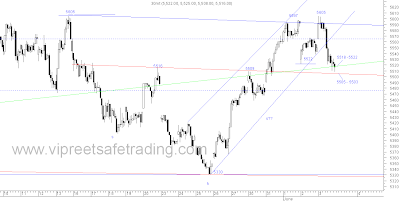 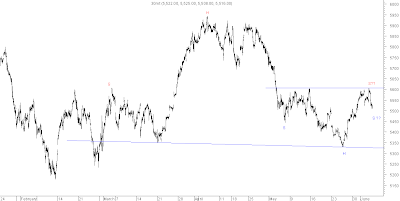 Half hourly charts show the scenario more vividly.The rally which was in an uptrending channel has been broken decisively. The double top at 5697 and 5605 has been confirmed by the break of the 5522 low giving an immediate  target of  5440.
The red neckline of the inverse head and shoulder is intact and will support at 5505-5503.Watch if this support holds. If breaks then Nifty first heads to 5440 which coincides with the 61.8% fibo level of the rally 5330 to 5605.
Chart II depicts both the bearish and bullish head and shoulder patterns pointing out the crucial levels of 5605 and 5330.