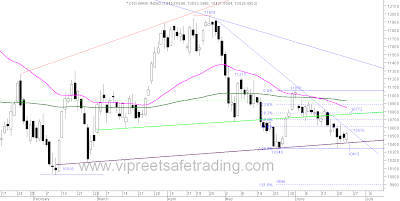 Outside days could be one day reversals showing a tug of war between the bears and the bulls with the winner being declared by the direction of the close. An outside day occured today with a white real body showing the bulls won.Considering the neckline is being held well since the panic selling day , there could be a possibility of an upmove.
The first confirmation would be the breakout from the downtrendline having resistance at 10570.Else I repeat,
Holding or breaking of 10340  to decide the immediate trend.If 10340 holds then 11056 will need to be crosed to confirm the double bottom made at 10340 with a target of  11772. If breaks then the head and shoulder target of 8721 could be achieved. 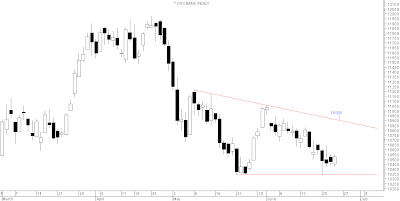 The decending triangle favours the bears