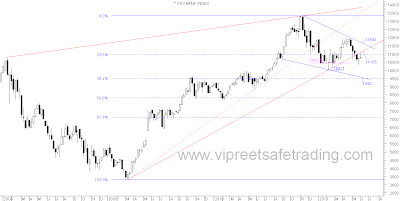 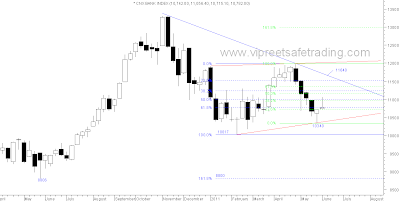 Last week's hammer had raised hopes of a pulback, within the downmove to achieving the bear flag's target  of  7725.Refer last week's post,  http://vipreetinvestments.blogspot.com/2011/05/reigning-bank-nifty-30th-may-2011.html .The pullback was to be capped at 11156  but the cap came a hundred points lower at 11056.This week's candle therefore did not confirm the bullishness of last week's hammer as it is a shooting star.

The shooting star has a long upper shadow indicating selling at higher levels and is bearish. The positive was that this week's candle remained above the high of  last week's hammer. The verdict at the moment would be a sideways move till next week's candle shows the way. A move above the high of the shooting star would indicate a move to break the downtrendline at 11640  and a move below this weeks low will indicate a resumption of the downmove.