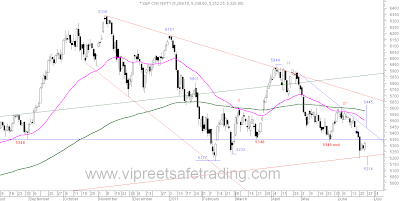 An outside day occured. An outside day shows a tug of war between the bulls and bears with the winner being declared by the direction of the close.The bullish candle today shows the bulls have won for the time being. The close was above the 5300  crucial level since the panic selling day on 20th June.
Refer chart for importance of 5300 level
(http://2.bp.blogspot.com/- qy7cwMVoQp4/TejcwHhu0JI/AAAAAAAAETM/ui4ijKDF35M/s1600/wkly+3.png ).  However  the Nifty needs to cross the 5350 level for any bullishness. 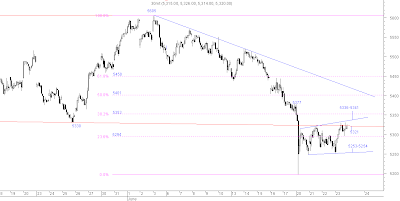 The half hourly chart shows the outside day could be spelling bearishness by depicting an expanding triangle which I already pointed out in "Midday Nifty" today. The neckline at 5321 is proving good resistance too. Till the 5300 - 5350 levels are not crossed decisively upward momentum will not catch up.