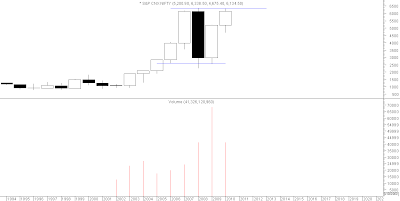 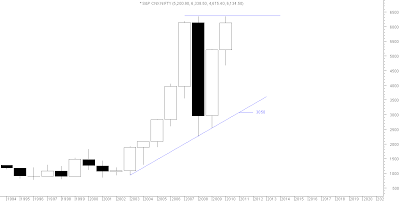 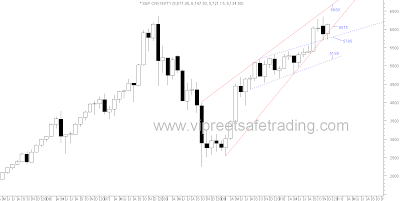 Monthly charts show consolidation since October 2010 after a good breakout in September 2010 from the consolidation between  September 2009  to August 2010.December 2010 has given the highest closing of the rally since March 2009.The rising wedge shown is red has suppot at 6075. Trade above 6075 can see Nifty targetting towards 6680. Break of 6075 can take a slide to 5785.

An Inside pattern has been formed with breakout points at 6338 and 5690.Further direction will be decided on breakout from either of these points.Till then expect a sideways move. 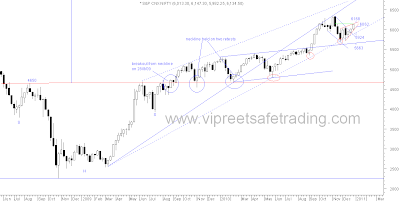 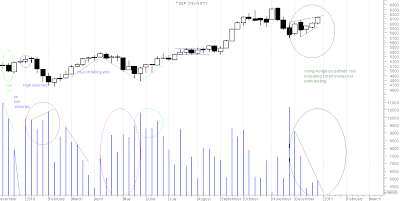 The weekly shows the move since the fall to 5690 as a rising wedge formation, shown in red.When they occur in a downtrend they are always continuation patterns and  are distributive in nature.  The fact that price is rising but volume is declining is a good indication that the move higher is weak and not backed by the Big money. The support from this pattern for the week is at 6062. Break below this level will lead to testing 5721 bottom.Holding 6062 could see the Nifty move towards targets mentioned earlier. 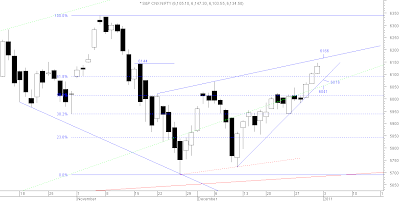 The move of the last three days seem heartening with the double bottom getting confirmed and giving a target of 6419. The resistance of 6144 was crossed intraday . The next targets are 6144-6166. Macd is in buy and above the zero line, Rsi 14 is moving up above 50 level.The OBV though is lagging the Nifty in scaling it's top corresponding with Nifty's 6070 as volumes on rise is is falling. One needs to be cautious till this gets corrected. 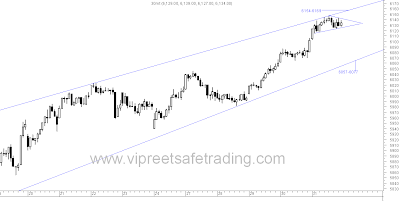 The upper trendline of the channel shown since last few days is acting as good resistance. Last day's move was one of indecision as shown by the triangle.Move above 6141-35 or below 6126-33  will be the short term trend decider. 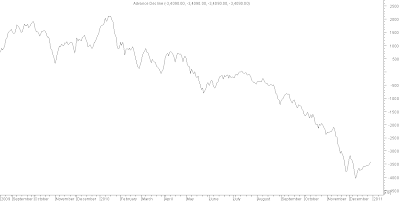 The March 2009 rally is nearing 2 years of rise. Volumes seem to be deserting the Nifty. Breadth has been continuously declining as shown by the Advance Decline Chart. The fall which took just one year has taken 2 years to recover showing the rise is not fast enough to instill full confidence in a further run up.

Recent action shows a higher bottom at 5721 and a confirmation of a double bottom. The advance decline line seems to be rising with the recent rise from 5721. Only the volumes need to confirm the rise.So one can be cautiously optimistic on the Nifty till bearish signs as discussed above start showing up.