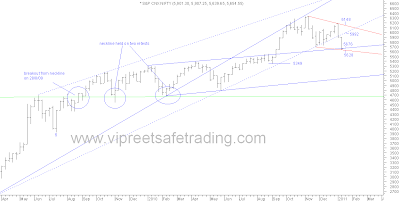 Nifty broke key supports making a lower low on the weekly charts.Falls have been steep and rises laboured, emphasising that a downtrend is in place. If todays low at 5640 is held then we may see efforts to rise to the resistance line shown in red with a resistance at 6148 for the coming week.In between resistances are at 5676 and 5992. Support is at 5628 failing which Nifty may  test of the lower trendline of the blue channel at 5040. Support exists at previous minor low at 5349.

OBV has maintained above its November 2010 lows giving a flicker of hope that today's lows may hold.Rsi14 and Macd has broken it's corresponding low. 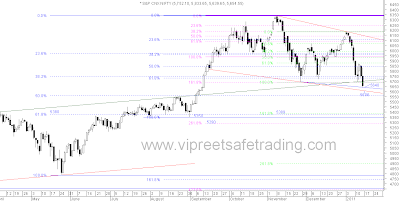 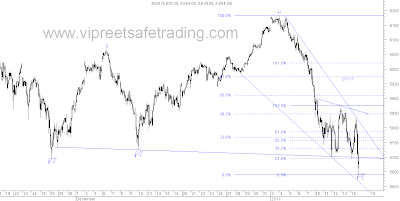 As anticipated yesterday , the pennant broke down leading to a break below the neckline giving rise to the possibility of a fall to around 5200.Immediate efforts from bulls pulling Nifty back above 5874, the high made on the last pullback, could lead to strengthening the bulls.Bullish hammer occuring at the temporary bottoms, marked on the chart by the bull figure,has led to good pullbacks.We may therefore watch for a pullback on Monday.Positive divergences on half hourly oscillators support the pull back.