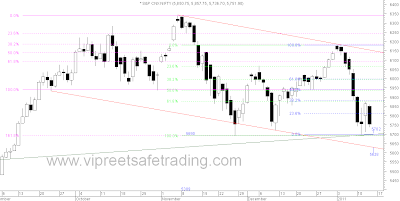 An Inside Day which made pigs out of bears and bulls alike.High of 5874 and Low of 5711 to be deciding levels for further action. Like I said yesterday,  still a lot of work necessary to put the bull rail back on track. The first being a cross above the previous peak of 6181, failing which get ready to get on to the bear rail once again.All demas , 5,10,20,50 are in bearish alignment. 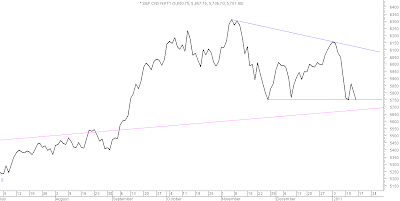 Line charts had a close exactly at the November 2010 low making a perfect decendling triangle. Either one more leg up to touch the resistance line around 6100 or a break of the support line at 5752. 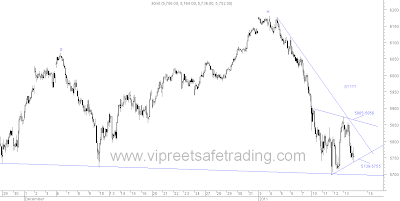 The right shoulder as of now is extremely malnourished making it easier for bears to break the neckline at 5700.A move above the downtrendline at 5842-5801 should make it easy for the bulls to put up a fight.The forming of a pennant , which is a continuation pattern , points at a break on the downside.The move if breaks down will be equal to the move before forming the pennant.