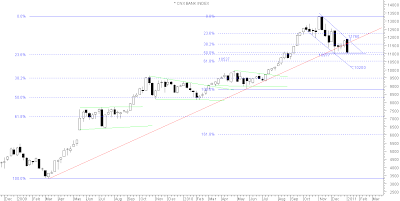 After several attempts to close below the up trendline from March 2009 lows the bank nifty bears finally succeeded.The flag formation taken by the correction has support at 10200 for the week.Earlier corrections were all sideways as shown in green on the charts.This time seems to be some serious selling .Volumes show a spike on down days.

Rsi14 which maintained above the 50 level throughout the March 2009 rally has broken below it. Stochastics is languishing in the ovesold levels. 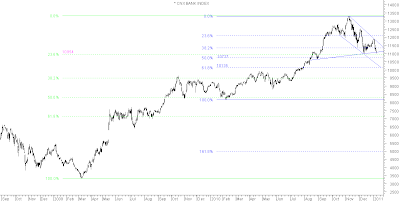 The 23.6 % level at 10954 should be good support with the previous low at 10977.Stochastics is in the oversold zone. Rsi 14 has not been able to cross the 50 level since the correction began,  showing lack of strength.A bounce may be due soon due to the oversold status.