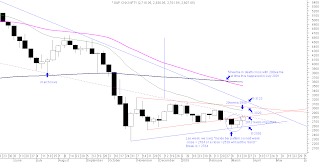 The past two weeks candles have formed an "Inside Pattern". So we could look for direction on the break of the high at 2764 and low at 2539.

The nifty traded towards the high of the range mentioned above , during the week , and closed above 2764, at 2807. The RSI (14) is moving up after showing positive divergence. MACD too has been in buy mode since 26th December,2008. The Nifty therefore, seems to show some strength on the weekly charts.The breakout though, is not very impressive as the resistance of 2806 has not been crossed convincingly.


We must remember that we are in a bear market and wait for the confirmation of a higher top higher bottom confirmation before getting very bullish. The resistances are, 2812-2836-2970-3020-3123 all shown on the charts.

Looking deeper at these resistances, I find that, the trendline joining January 2008 and March 2008 lows, shown by the dotted line , which has been stiff resistance since it was broken violently in October 2008, and the lower trendline of the triangle are both at 2812 for the coming week. So a closing above this level would be a bullish move , and a closing below this level would either have sideways moves or a fall.

Supports are at 2700 which is the week's low and 2592 which is the support of trendline from October lows , which if broken could take us to the triangle targets of around 2000.

yes i couldnt take rest as i am so obsessed with trading. well after the death cross in july 2001, the final bottom was made soon enough in september after the wtc attacks.