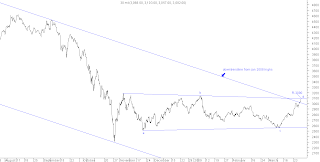 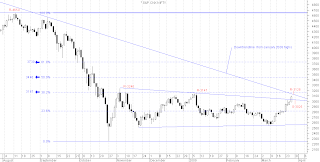 Today's action must have left most traders breathless. The longs must have booked out early and the shorts must have sunk into a depression waiting for the markets to correct.

I wrote yesterday, "The half hourly chart shows breakout from a pennant, which is a consolidation pattern, signaling that the highs of the shooting star may be scaled. Moreover the resistance of 2970 has been overcome on a closing basis , clearing the path for the next target of 3147 which is the January 2009 top"

As anticipated, the breakout from the inside day pattern was on the upper side and has formed a large white candle.This action has also led to a brake out from the upper trendline of the triangular formation as shown on the charts. We have yet to see follow up buying to be sure that this breakout will not turn false like the breakdown from the triangle, earlier.

The half hourly Line chart shows breakout from the downtrendline connecting January 2008 highs with September 2008 highs. If this sustains then we can see an upmove of 1850 points .
The 'd' leg of the rectangular pattern has immediate resistance at 3090. If the resistance is honoured then we may see the 'e' leg down and a possible downward breakout. By looking at the Line charts we can gauge the real intentions of the market players as closing prices depict the "consensus" reached for the day. It helps us to get a feel of the market without the "noise".

The Oscillators have reached overbought territory on the daily charts. The oscillators on the half hourly charts have given negative divergence , but showing signs of moving up again.

Tommorow's action will be important as it is the last day of the week and any hesitation to carry over longs will bring profit booking , as the bearish overhang will still be lingering in the minds of traders.

Weekly close above 2812 , as mentioned in my weekly post,
"the trendline joining January 2008 and March 2008 lows, shown by the dotted line , which has been stiff resistance since it was broken violently in October 2008, and the lower trendline of the triangle are both at 2812 for the coming week. So a closing above this level would be a bullish move , and a closing below this level would either have sideways moves or a fall."
will confirm bullishness for some time and higher targets.