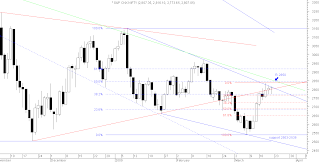 The two dojis formed in the last two days shows waning upward momentum. Also the upper trendline of the channel has proved stiff resistance and inspite of good momentum since bottom at 2539, the breakout from the channel failed. Momentum indicators also show weakening before reaching oversold levels indicating the rally was just a corrective one.

By the way the 84 SMA on daily charts which I have referred to earlier as a stiff resistance to upmoves is at 2816. Trade via option route if you have to as direction is not clear. Also settlement week has its share of excess volatility.