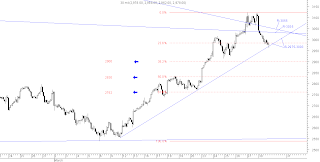 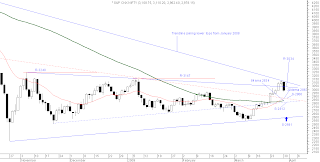 Teasing ! That is what the Nifty is doing. Teased the bears first and now the bulls. The triangle break out is false. The down trendline from January highs was too strong a resistance and Nifty has reacted strongly from there after touching it at 3123. Today's action was extremely bearish . Not once was there an attempt to rally. Supports on the daily chart are at 2866-2834. The 20dema is at 2863 and the 84 sma at 2834. This should be good supports.

The half hourly charts shows the uptrendline of the rise from 2539. This has not been broken as yet and offers support at 2975-3003 levls for the day. One can go short on the break of this trendline with stop at 3055 which is resistance offered by down trendline from January highs.

All the levels are working out very well... (most in opening itself)

Traders like me r getting only limited profit or not trading cos of fear... for carry over the shorts/longs....

Thank u very much...

Wonderful post ma'am! a very gud analysis indeed. this is the fist time i visited ur blog but i am sure it wont be my last. please keep up the gud work.

thanks rishi. please register on my discussion forum too at http://www.vipreetsafetrading.com