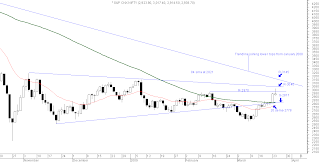 The stochastic has started moving down from overbought territory signaling that prices are no longer closing near the upper range and a reversal may be on the way. The RSI(14) has still not reached overbought territory but has turned flat. Tomorrows price action should confirm whether the bearishness of the shooting star is for real.

Shall be very thankful.

I would appreciate it if you put in your queries at the discussion forum at www.vipreetsafetrading.com