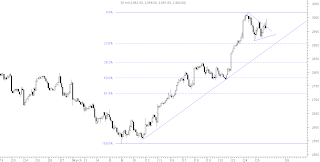 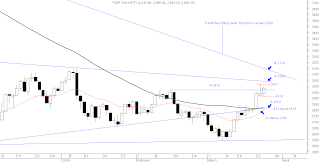 
Today was an "Inside Day" meaning trade was within yesterday's trading range. This keeps the possibility of a reversal alive, as the high of the shooting star formed yesterday, has not been scaled. However, signs of bearishness which was so dominant since January 2009 are hard to find. The next month futures was trading at a 10 to 15 point premium for a good part of the day ! The 84 day SMA which i have been using as a long term indicator has been bullishly crossed once again , but this time the cross seems to be stronger and decisive. The stochastic is still in the overbought zone but has not given a sell. RSI(14) has not yet reached the overbought zone signaling more upsides are possible. The RSI has crossed the highs made in May 2008, which it was not able to cross since May 2008. Macd is strong above the zero line.

The half hourly chart shows breakout from a pennant, which is a consolidation pattern, signaling that the highs of the shooting star may be scaled. Moreover the resistance of 2970 has been overcome on a closing basis , clearing the path for the next target of 3147 which is the January 2009 top, of course provided the shooting star top of 3017 is crossed. RSI(6) -- which gives a good overbought / oversold indication in the very short term -- has started showing strength after reaching the oversold zone today morning.

I found very interesting comparison between the last bear mkt (2000-2003) and this one.
1. Mkt corrected 60% of the top.
2. Nifty did not test the bottom again.
3. During the bear mkt all negative moves were retraced by 25% except the final bottom, where retracement was of 50%.
4. After the final bottom ( it was 850 in '00 and for me it is 2250 this time) 920-950 zone was tested thrice ( we have tested 2500-2550 zone twice).After the second test, the rally was fast and furious as we are witnessing now.
5. But for the whole 18 months of consolidation phase, nifty did not cross the 50% retracement from 850 bottom. Once crossed, it never looked back. Similarly, we should not cross 3250 till the bear mkt is over.
The only major difference for me is the time factor. I am reading it as compression of time due to more awareness and accessibilty of data with investors.

Please correct me if I am wrong.

wow ! that is good analysis. will look into it after trading.

Thanks. Anxiously awaiting your cooments and expansion of my reading of the mkt.
Because, i am net short in the mkt now once 3000 was conquered as my tgt is maximum 3150-3170, wishing to add more shorts there. (I hv been positional long n short since oct and have traded both ways beautifully till now)
Regds

I am psoting my reply on the discussion forum at http://vipreetsafetrading.com/forum

would welcome a discussion there
regards
lakshmi