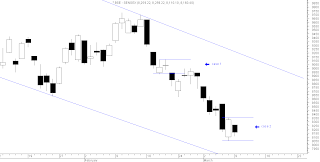 After going back to my textbooks --Steve Nison's Beyond Candlesticks, I have concluded that, the pattern of the last two days trading on the sensex , is a bullish harami, which is the candle charts version of an inside day of the bar charts.Though, in case of a Harami only the real body (range of open and close) of the second candle needs to be engulfed by body of the first candle.

As per Nison, the colours of the candles forming a Harami Pattern, can be white/white, white/black, black/white and black/black. (Please note, white is an upday and black is a down day). Their bullish or bearish nature depends on the preceding trend. Harami are considered potential bullish reversals after a decline and potential bearish reversals after an advance.No matter what the color of the first candlestick, the smaller the body of the second candlestick is, the more likely the reversal. If the small candlestick is a doji (doji is a candle with open and close almost the same), the chances of a reversal increase.

Because the first candlestick has a large body, it implies that the bullish reversal pattern would be stronger if this body were white. The long white candlestick shows a sudden and sustained resurgence of buying pressure. The small candlestick afterwards indicates consolidation. --courtesy stockcharts.com (I was too lazy to write it on my own) To come back to the sensex,

So thursday's trade will confirm whether we are starting a rally which may sustain for sometime. Please let me know your views.

I did not understand anonymous! It is more important to look at the larger picture. Also everything is a probability, so stops in proper places, please!
lakshmi

I read this pattern recently in "Business Line", that time thought of you for asking.... luckily u have explained clearly with charts.

Why i didn't ask u is... simple... first let me grasp what u r posting and writing in your school...and will get back if i have any doubts... if at all the master is good... wat to ask...

Thanks a lot for your hardwork...

The turn dates are based on my proprietary system. I dont use any price-based probablity system as a technique to trade. The next swing top is 20/3-23/3 with a price tgt of 2760-80. Dates in between represent smaller one day swings. the Last swing bottom was 6/3 and if you are a positional trader you would go long(at what ever price point you are comfortable) with a stop at 2550, tgt as mentioned as per the dates. If i go wrong 13/3 is a swing top with 2680-2700 as tgt and 20/3 swing btm with tgt lower than 2500, but that looks unlikely.

anonymous, so as per your system, it is possible that there will be no new bottom for the time being?

sujatha thanx for being my most avid reader

anonymous
So the bullish harami may play out as the low will not be violated for the time being. please join my discussion forum at www.vipreetsafetrading.com so we could interact there instead of here.

Sorry...I dont discuss in open forums. There is world of technical analysis (more precise) than what you might be using currently. If you are keen(interested) pls write to me privately at sdeepakn@gmail.com

Sure would defintely like to know your method. Always open to learn new methods

@ Anonymous - I read your postings here, really my mind is swinging like NIFTY and the swing system, cos i am new to this swing trading. Can u please eloborate your method in forum? - that will be helpful for the swing traders. If you don't mind please start from the beginning what is what? hope lakshmi'ji will agree.

@ Deepak - Why at personal id? please consider to discuss in forum itself, so that beginners like me will get benefitted and always be grateful.

Sure I agree. I am inviting him once again and have also said i will start a new sub forum for him