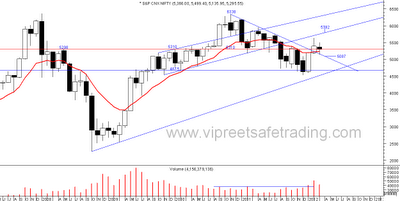 Bullish Indications : The downtrendline from November 2010 proved good support.Support on the trendline now for April at 5087.Close maintained above the 12 month ema.Macd gave an uptick and is above zero line. Rsi14 and stochastics too above 50 line.
Bearish Indications : A lower high lower low monthly candle.Macd in sell mode. Rsi14 has turned down.Candle for the month is a doji with an equal upper and lower shadow showing confusion/indecision and lack of conviction to carry on with the uptrend. 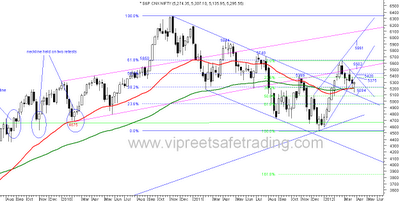 Bullish Indications : Close maintained above 40 & 100 wema and the downtrendline from November 2010.Bullish cross between 40 & 100 wema comtinues.Bullish hammer formed. Bullish flag pattern still valid as shown in chart below.So bullish view can be held till break of 5025 for the coming week.Rsi14 given an uptick above 50 level.
Bearish View : A lower high lower low candle formation continues. Traded below the uptrendline from December 2011 lows.Macd given a downtick. Stochastics in sell below 50 line. 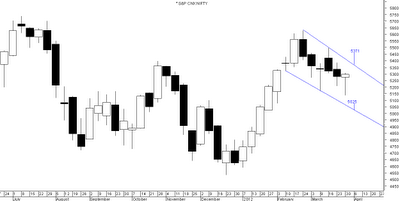 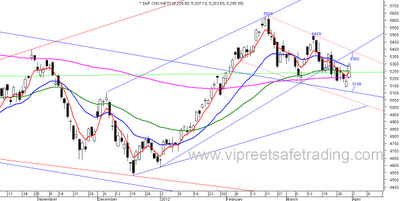 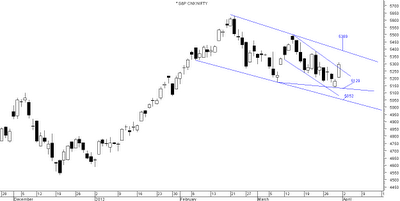 Bullish Inidcations : Gap up opening which was maintained. Bullish candle without lower shadow closing above all demas as can be seen in chart I. 20,50 & 200 dema bullishly aligned.The candle broke out from the downtrendline drawn from 5499 peak.Flag pattern still valid till support at 5052 is held.Downtrendline from November 2010 held which now has support at 5108.Positive divergence in stochastics.Oscillators moving up showing strength.
Bearish Indications : Macd and Rsi14 below midpoint. Trend down till 5437 top is taken out. 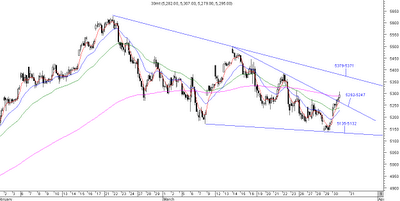 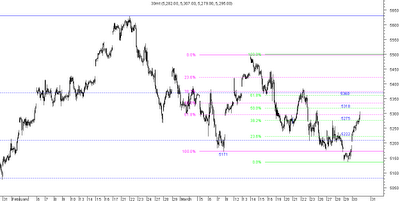 Nifty is in a short term downtrend as is visible by the bearishly aligned 20,50 & 200 emas on the half hourly charts and the fact that it the lower low lower high pattern is still not reversed. This will happen when the 5386 top on half hourly charts is taken out.This also coincides with the downtrendline resistance at 5379-5371.The 61.8% fibo retracement level of fall from 5399 to 5136 is at 5360.

The medium term trend however remains up till the flag pattern is valid.The fact that the lower low of 5171 was taken out intra week but recovered from the solid supports of the downtrendline from November 2010 shows  bullishness.Buy on dips continues.