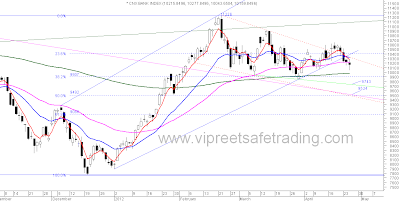 The uptrendline for this rally which was redrawn for the third time has been decisively cut once again.The short term uptrend which started at 9845 has been broken with the higher low at 10060 being broken yesterday to register a low of  10043.The close however managed to keep above it. 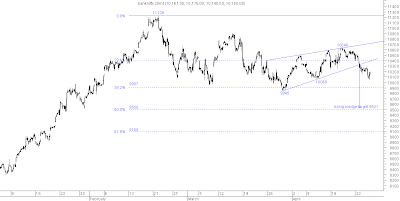 Half Hourly charts show the rising wedge has been broken giving a target of 9521. This coincides with the 50 % retracement level of rise from December lows at 9777.

Lower high at 10646, close below 50 dema , 5/20 dema bearish cross and break of rising wedge shows  bank nifty favouring the bears. However the higher time frame is in a sideways move which favors neither the bulls nor bears. Shorts should have a stop loss of 10646 and longs a stop of 9845.