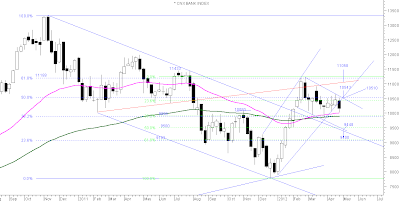 The breakout above downtrendline from 11226 proved false.The Bank Nifty made a lower high lower low candle and  has broken below the uptrendline from December once again.Oscillators  showing weakness which may lead to a further fall. 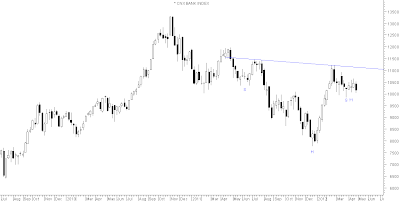 The right shoulder of an Inverse head and shoulder bullish pattern could still be forming. 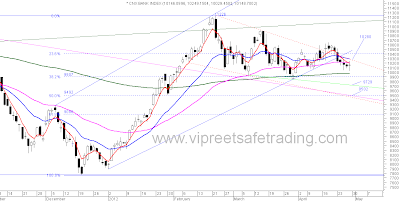 An outside day pattern was formed which indicates indecision.The candle formed was a doji which shows indecision too.So a reversal of the downtrend may be in store.The trend following Demas 5/20  and 5/50 are  in sell.The break down from the uptrendline is intact for the fifth consecutive day. The close is also below the 50 dema for the third consecutive day.The rising wedge breakout shown in the half hourly chart below is intact with a target of 9521. 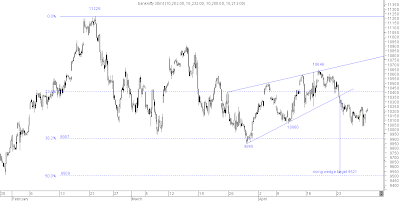 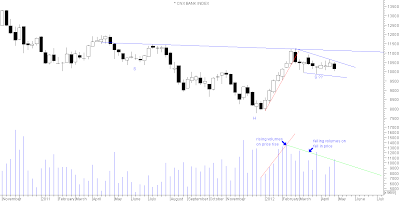 Checked  out the volume chart and felt  more than convinced that the fall from 11226 is a pennant forming.It has adhered to all the features. Breakout from the November 2011 down trendline, increased volumes on the sharp rise from 7766, falling volumes and  converging trendlines on the fall from 11226  and the time taken till now is 9 weeks.The validity of the pattern remains till 12 weeks by which the pattern should break out.So the bulls have 3 more weeks to prove their might.Else the bears will take the Bank Nifty to lower levels.