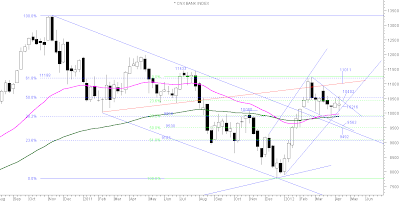 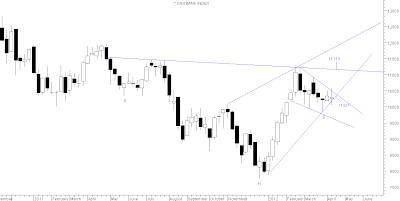 Bullish indications are that the 40 and 100 wema are still bullishly aligned and the flag formation still valid.Three week low at 9845 still intact.An inverse head and shoulder's right shoulder could be forming. Stochastics has given a buy before reaching the oversold level and Rsi14 is above the 50 level.Macd is above zero level.
Bearish indications are flag resistance line proved strong once again.An outside day pattern was formed on weekly charts which is a reversal pattern.Trend unclear with a long legged doji.A bearish rising wedge,shown in chart II, has been formed which was broken down intra week.Trade below the support level of 11327 will have bearish implications. 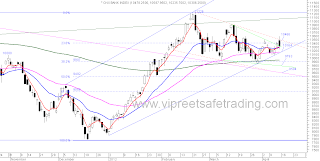 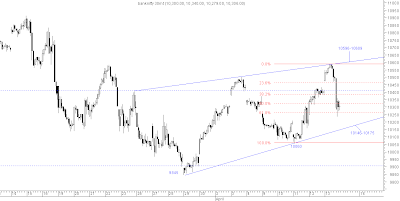 The rising wedge and flag forming on the weekly charts show the tussle between the bulls and bears.Trade below 11327 will be advantage bears and above it advantage bulls.The outside day pattern  formed on the weekly as well as the daily  is a one day reversal pattern and since the Bank Nifty was on a rise there may be some fall. Half hourly charts show the fall in progress from 10588 which is a higher high.This has now formed an  upward trending channel which has support at 10146-10175 for Monday. Supports below this at 10060-9845. Holding these supports will keep the bullish options open.
The inverse head and shoulders shown since past few days on half hourly charts has been nullified.