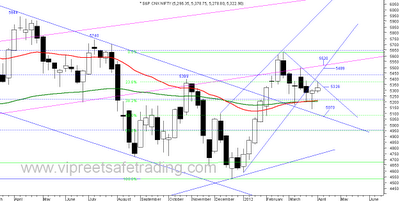 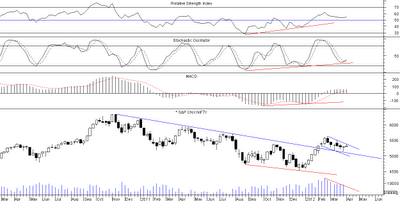 Bullish Indiactions : A higher high higher low candle for the week.The correction from 5629 has been on falling volumes supporting the flag pattern that the correction may be consolidation.Stochastics has given a buy before reaching the oversold level and Rsi14 too has turned up above the 50 level.Macd is above zero level.
Bearish Indications : The weekly candle is a shooting star which has a small body and a long upper shadow.The candle formed at  the flag's resistance line is caution to longs. 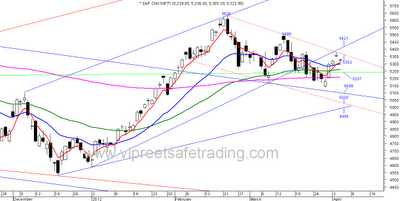 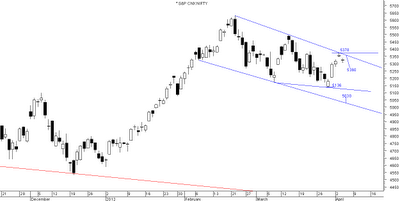 Bullish Indications : All demas bullishly aligned once again.Flag formation still valid.Macd moving up.
Bearish Indications : A bearish island reversal pattern was formed where there is a gap on both sides of the candle. Island reversals frequently show up after a trending move is in its final stages.This indicates that the next leg down may have started.If breaks 5136 then another lower peak at 5378 will be registered and the downtrend may gain momentum.Oscillators stochastics and Rsi14 showing weakness too.


Half Hourly Chart I 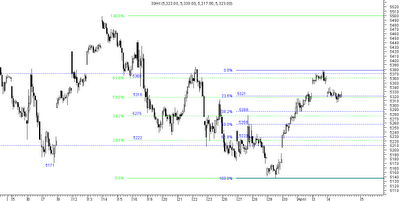 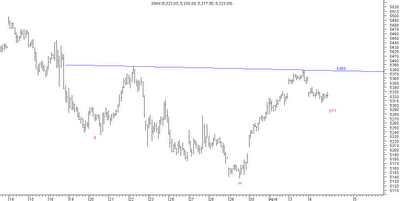 A potential bullish Inverse head and shoulder pattern seems to be forming with the neckline around 5380.Fibo supports marked on chart I. 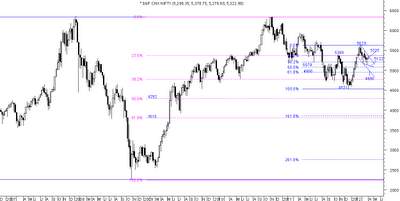 Long Term View : Nifty has been in a range since it made the 2008 top at 6357 and the low of 2532 as is clearly visible in the weekly chart below.Till the higher low made at 4531 holds chances of the fall from the November 2010 highs could be just a correction.
Medium Term View : Having scaled the last lower top at 5399 to make a top at 5629 the Nifty will have made a higher top higher low if 4531 is held and could be the start of a new rally with confirmation pending the scaling of the November 2010 top at 6338.
The support line of the flag formation till held, will support the above view.
Short Term View :  The daily chart shows a lower high lower top formation since the top of 5629. This will be broken only if the  top of  5499 is scaled.Till then expect the low of 5135 to be broken.Breakout from the flag on the upside could be an early indication that the uptrend is resuming.