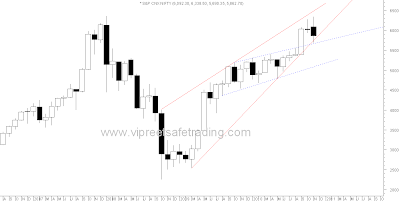 The November month candle shows indecision as the almost equal upper and lower shadows show selling at higher levels and buying at lower levels.The  bias is  slightly  bearish though, since the candle is black and closed  155 points down. Breadth was very negative but volumes just average.

Oscillators Roc 12 and Stochastics are moving lower after showing negative divergence. Rsi 14 has turned down .

Chart II shows movement in a well formed upward moving channel. Support for December is at 5416 and Resistance is at 6453.Expect increased volatility within this range.