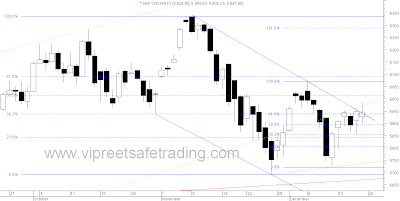 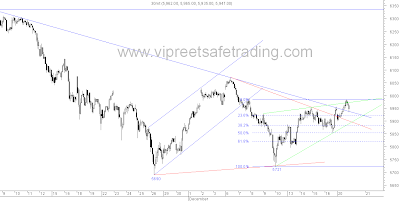 A breakout above yesterday's high of 5956 which could not sustain, a breakout from the equilateral triangle in red which sustained and the breakout from the downtrendline from 6338 which also sustained.But these breakouts are not impressive as Nifty still languishes below the 38.2% retracement levels of the fall till 5690. Today's trade gave some promise of a good follow up to the breakout only to encounter a bear attack to end  the day without any gains to talk of. Half hourly oscillators have made a negative divergence.So Nifty is undecided whether to follow the bulls or the bears.

Let's cut down the clutter and examine the Line charts 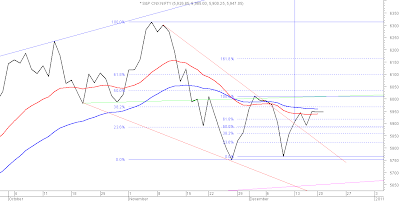 The day's trading was flat. The Nifty is sandwiched between the 40 dema at 5959 and 20 dema at 5938.The breakout from the downtrendline from November highs is maintained but is not too impressive as the expected  upsurge has failed to come.The rise has scaled barely 35 % of the entire fall.

Recovery of the fall from 6338 is laboured. The daily Rsi 14 has failed to move above the 50 level. Stochastics has turned down in the overbought zone  and Macd is below zero line in sell.the positive was that thursday's low of 5855 was held.

Recovery attempts seem to encounter bear attacks. Only a close above 6010 will bring some strength to the bulls.