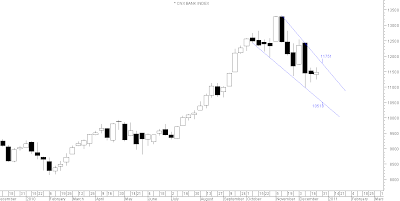 Status quo of last week maintained. Repeat, Weekly Charts show support taken exactly at the 23.6% retracement level of the rise from March 2009 lows. The uptrendline from March 2009 too is maintained. The 50% retracement level shown in green and the 2008 peak coincide around the 10645-10775 area making it a strong support in case selling were to continue. This is also the area where a pause was taken in August 2010.

The week's candle was  again  small bodied and small ranged like last week's, though a marginal high and low were made.This keeps it within the bearish long ranged candle's ranged formed on 10th December.

Stochastics still in  the oversold zone and just turned down again giving a sell signal with it's signal line. Rsi 14 has turned up from the levels reached in February 2010 which is above the 50 level showing mild strength. Macd is in sell but much above the zero line.
Daily Chart 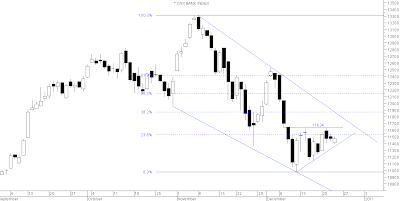 The daily raises hopes of some recovery with an ascending triangle. with breakout at 11634.Breakdown level on the short term uptrendline would be at 11430.

Interest in bank counters seems to be waning. Strength on upward momentum is negligible. Only a move above the falling wedge and the lower top at 12536 can bring interest back.Till then one should be cautious on trades.