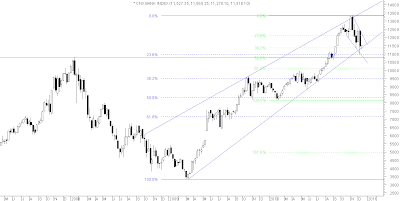 Weekly Charts show support taken exactly at the 23.6% retracement level of the rise from March 2009 lows. The uptrendline from March 2009 too is maintained. The 50% retracement level shown in green and the 2008 peak coincide around the 10645-10775 area making it a strong support in case selling were to continue. This is also the area where a pause was taken in August 2010.
Stochastics has reached the oversold zone and just turned up. Rsi 14 has turned up from the levels reached in February 2010 which is above the 50 level showing strength. macd is in sell but much above the zero line. 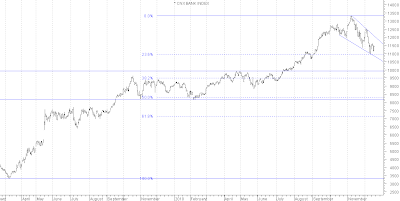 Daily charts show a falling wedge which is a consolidation pattern with support at 10827 and resistance at 12040.
Oscillators Rsi 14 and Stochastics have turned up from the  levels reached during May 2010 correction.Thus a good chance of holding the bottom made at 10977 on 10th December.

Good supports exist around the 10800 levels. A higher bottom has been made at 11147. Till these levels are broken one could lbe cautiously  long.Bullishness will resume once the breakout from the falling wedge occurs.