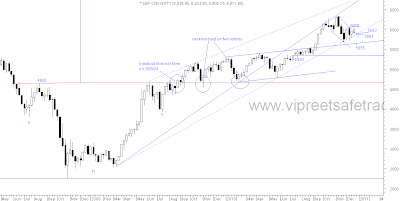 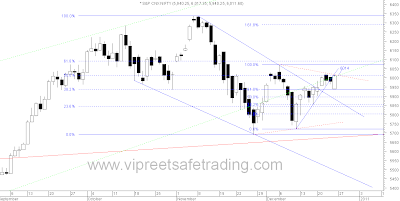 Today's candle was a bullish engulfing candle. The indecisiveness discussed on weekly charts is more obvious on daily charts which shows that the red dashed equilateral triangle  has still not been broken.Bullish engulfing candle is bullish in a downtrend  and the Nifty is in a downtrend since the top at 6338. On the other hand the Nifty is in a short term uptrend from 5721 in which case it could be the last gasp of breath by the bulls as is interpreted when the bullish engulfing candle occurs during an uptrend. So no option but to wait for a confirmation of the bullishness/bearishness .  A scale past 6014, which is the breakout point as well as the   50 % fibo level of the fall from 6338 to 5690, is required to get the momentum UP.
Daily Line Chart 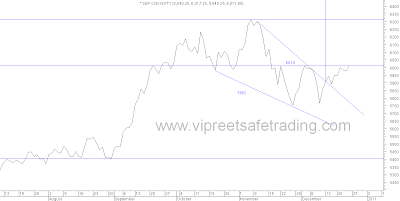 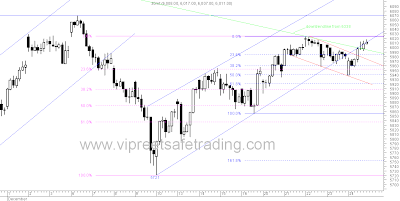 The daily line chart and half hourly charts give more insight into this indecision. The bias is definitely up as shown by the break out from the flag shown in red on half hourly chart. The breakout from the falling wedge on the daily chart is also being maintained with a higher high higher low formation. A close above 6011 will confirm the double bottom at 5752 and 5766 and promise an  upmove of 255 points.