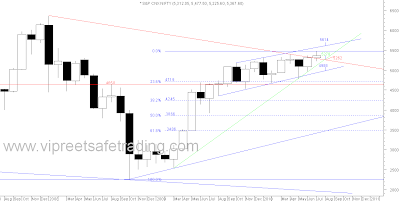 The monthly charts have a breakout on line charts but failed to hold the breakout on candle charts. The breakout above the downtrendline from January 2008 highs is however maintained. Low volumes for the month makes one cautious  of the breakout. Support on uptrendline from March 2009 lows and on the downtrendline from Jan 2008 highs coincide around the 5272-5262 levels making it important for Nifty to sustain above these levels. Break below these levels should find support on the trendline joining lows since August 2009 at 4988. Momentum oscillators continue showing negative divergence. 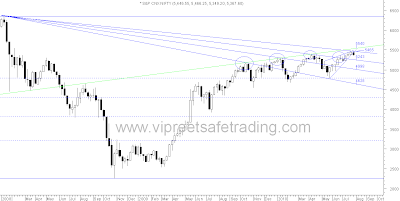 A lower high lower low bearish candle breaking down from the rising wedge.Volumes were higher than on the last week's rise.The strong support of last two weeks of 5350 was violated intraday but managed to close above it. Oscillators continue to show negative divergence. The green trendline,  ( pointed out by  Rahul , a boarder on the discussion  forum  of  Vipreetsafetrading.com ),  has been strong resistance since two years !!  Resistance at 5540 on this trendline. The downtrendline from Jan 2008 highs to the recent high of 5477 offers resistance at 5465. Supports at 5243. 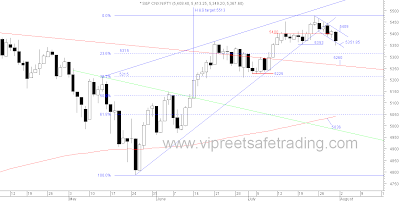 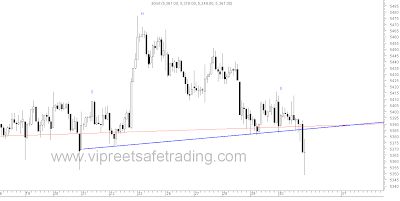 The neckline of the head and shoulder pattern on half hourly charts has been broken setting a target of 5277. Positive divergence is seen on the oscillators.


Bearish Points
Advance decline line has been showing a downtrend  since January 2010.
Negative divergences have been persisting on all time frames since January 2010.
The rally from 4786 formed a rising wedge, a bearish pattern, which has been broken.
A lower high and lower low candle formed on the weekly charts.
Nifty has closed below all short term emas , 5,10 & 20 .
The rally from 4786 made a lower high candle after nine weeks of higher highs which is line with the pattern followed since August 2009.This makes the rally ripe for a correction timewise.

The Nifty is bullish in the  longer term  as correction of each rally has failed to break the previous correction low.
Moving avearges on daily , weekly and monthly charts continue to be bullishly aligned.


My View
In the short term  bearishness seems to have creeped in. The longer term  however continues to be bullish.Longs therefore need to be cautious. Reducing one's exposure and remaining hedged would be prudent. Shorts to be attempted only after a decisive close below the 5200-5235 level.

Excellent analysis. Pl also explain what does it signify when multiple trendline can be drawn from starting point to different highs or lows like you have done in the weekly chart. Thanx.

anoop, it doesnt signify anything. just trying to find new resistance points. I had drawn them to point out a certain pattern followed. Read my earlier posts for this explanation

Madam,
Ihave been going thru yr analysis for long time and it gives me the confidence to sit infront of the terminal and take decisions. I have been thinking of contacting you. I would like to study technical analysis. How to contact on yr e mail id?