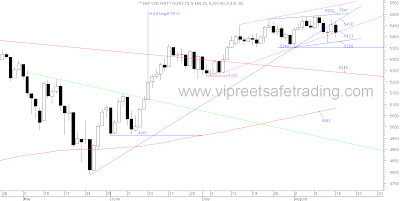 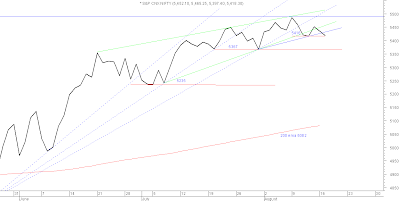 Nifty made a bearish candle with a lower high lower low . The doji on weekly charts had cautioned of a possible weak week of trading. Breadth was negative and volumes high. Volumes of declining stocks was higher.

The uptrendline from 4786 passing through the low of 2nd August at 4351 proved good resistance at  5466. Nifty hit a high of 5465. The resistance from this line tomorrow is at 5478.the 20 dema proved support once again at 5417 with nifty closing just above it.

The nifty continues to flip flop in the range between 5349-5477-5587-5492.Till this tug of war is resolved, trading will be difficult with neither bears nor bulls benefitting. Few new bearish signals have appeared like the bearish alignment of the 5 and 10 day emas and the break of 200 period ema support on half hourly charts.

Line charts show a little more clarity. The trendlines are being broken with ease. The latest short term uptrendline in blue from 5367 has also been broken showing waning momentum.The green rising wedge on line charts have been broken once again.

Longs should keep a strict stop of 5349.

Madam,
You haven't commented anything on volume, thats also something to be worried about for candlestick of 16th Aug.
Excellent analysis though.

anoop i have mentioned volumes in the very first para