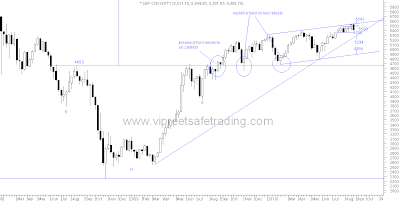 Last weeks warning of  "All is not well" may have helped readers to take the right steps to book profits and or cut losses. The breakout witnessed last week from the 5350-5492 proved false. The resistance from the trendline joining January  and April 2010 proved strong and the Nifty corrected 140 points to close near  the lows at 5408. Breadth was very negative but volumes were below average. Oscillators are moving down and are already below their previous low indicating the support of  5350 may not hold. Macd has made a lower tick but is still in buy mode.

In keeping with the channel pattern forming since the bottom of November 2009 and top of January 2010, the Nifty should correct to the lower trendline of the channel. This week's candle can be identified as a reversal candle -- a higher high, a lower low,  a close at the low of the bearish candle and  a close below the close of the previous candle.Prudence though, would demand waiting for follow up action to the reversal bar to turn bearish.

Chart II shows that  uptrendlines from the March 2009 bottom, if violated,  has led to a fall of  400 to 500 points lasting  3 to 4 weeks. This makes the support on the present uptrendline at 5287 very important. The  channel pattern, mentioned above, also  demands a fall of around 600 points to touch  it's  lower trendline. Thus, if Nifty is not able to take out the high of 5500 , an immediate fall of 500 to 600 points could be expected.
Daily Chart 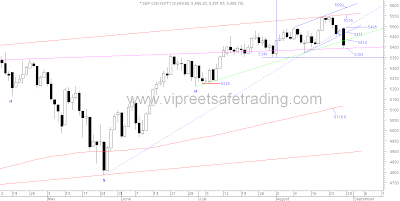 The daily charts show a bearish engulfing candle on very low volumes . Breadth was negative in a ratio of 1:2. The break below the uptrend line from 4786 and the strong support of the 20 dema is decisive. Nifty took support exactly  on the pink neckline at 5393. Strong support exisits  around the 5350-5393 range. If  this fails, a slide to 5287-5250-5225 is possible. 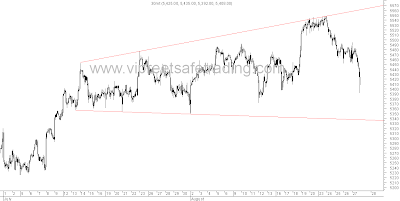 The expanding triangle on intraday charts is still valid with support on the lower trendline around 5335.

The long awaited correction may have begun as the bullish pointers are few turning my bias towards being more bearish than bullish. However till the support of 5372 holds hold on to longs. Traders with more risk appetite could wait for a break down from the expanding triangle .