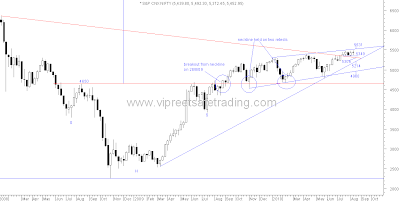 Weekly candle was a doji with  a higher high and higher low. Volumes were higher than that of last three weeks.The Nifty maintained above the 4 week support of 5349 , making it the 5th week of holding the support. .The upper limit of the  range was once again expanded by 5 more points making it  5349-5492. This expansion on the upper end of the range with the bottom remaining around 4350 explains the expanding triangle seen on half hourly charts. Thus we may see weakness only below 4350.The negative divergences on the oscillators are intact. This week's doji is alerting as it could be signalling bearish having occured at the current top.Confirmation of it's bearishness is required with bearish followup next week. 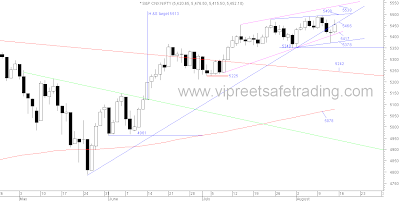 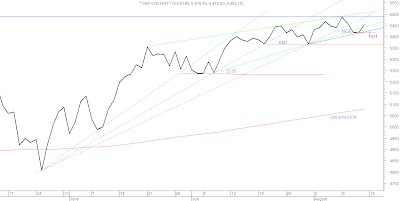 The daily candle charts shows a morning star formation which is very bullish . This formation is very effective when it appears after a long downtrend. Though the Nifty did have a fall in the last few days, the fact that it is near the top of this rally should be borne in mind while thinking bullish. On the other hand, the fact that yesterdays indecisive doji was followed up by a decisive white candle which made a higher high and higher low confirms the pattern.Fresh longs can keep a stop at the low of yesterday's doji at 5372. Positional old  longs should raise the stop to a close below 5349.To add to the strength shown by Nifty is the fact that the break down from the green rising wedge on line charts proved false.The 20 dema too was good support and is now at 5417 which is the swing low on line charts. 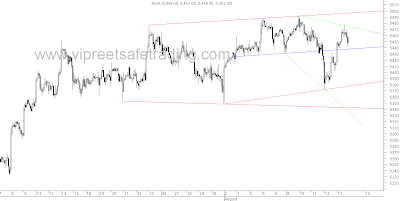 Unlike other triangles, the expanding triangle is  one  where indicators become more and more unpredictable, the price makes wider fluctuations, and volatility keeps increasing as the bounds of the range expands.
Unlike the other triangle patterns, the expanding triangle is a reversal pattern. It is rare to find it during a continuation phase, and it certainly doesn’t signify a period of consolidation. Instead, the expanding triangle is often found accompanying double, triple tops or bottoms, where one side of the triangle remains somewhat static, as the other leg expands to the other side, depending on the nature of the trend. It is a clear sign that the trend is running out of momentum, and that the traders see a large counter trend movement as more viable and logical than another leg in the direction of the existing trend.

Thank you very much for the early updation.

Happy Independence Day to all.

Happy Independence Day to all!