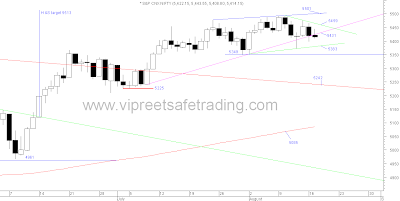 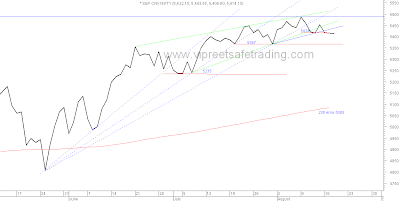 Still within the range of 5349-5492. Appearance of expanding triangle, equilateral triangle ( shown in green) and today's candle forming an Inside pattern show how confused and indecisive the market players are.the candle formed today shows inability to maintain highs.Breadth was very marginally negative and volumes below average.

As mentioned yesterday, bearish signs are slowly showing up and today it is seen in the break down from the pink trendline and the 20 dema both of which gave support since the low of July 2010. Daily Rsi14 too has broken it's corresponding low.  OBV has broken the supports corresponding to Nifty's support of 5349 on candle charts and 5367 on Line charts. Line charts show the break of the previous minor trough at 5416 though very marginally. Chinks in Nifty's armor showing.

Then why you are reading "some confusing blogs"?? it's better to stick with the one "which is giving you fresh air" :)

Rani, thanks for your compliments. But i would like my readers to know that I write the blog just to make myself more confident and not for compliments. Yes compliments are nice because they reassure that the analysis is good.But i would appreciate comments which adds to my knowledge and the readers knowledge.

No offence meant to anyone please