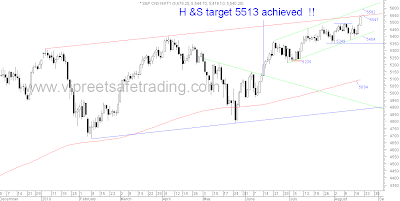 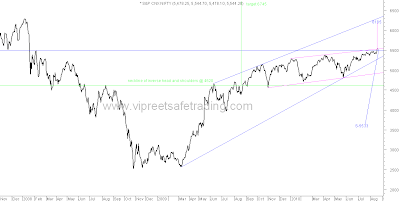 So the inverted head and shoulders target mentioned in my post of 15th June ,was achieved. On 15th June, with the Nifty just recovering from the lows of  4786, it seemed an unachievable task.Proves that patience and sticking to technicals is key to making money in stock markets.
Today's follow up bullish  white candle to  yesterday's bullish candle was very encouraging.Volumes were good and breadth positive. It was a steady up all day with very minor pullbacks which got gobbled up in seconds.

The 4 week range has been broken decisively, giving a target of  around 5600.This coincides with the resistance on the upper trendline of the  green  channel shown on candle charts. The red trendline joining tops of January 2010 and April 2010 proved resistance today and resistance for tomorrow is at 5547. A breakout from this trendline will give a 670 point upmove which is the height of the channel formed since January 2010.

The Line charts show a breakout from the pink channel giving a target of  6185. A little unbelievable but  so was the target of  5513 just 2months back.Staying above the upper trendline at around 5533 is important. The inverted head and shoulder with neckline at 4650 has a target of  6745. Hiccups minor and major in between is bound to occur.

Oscillators on daily charts have started showing strength and Macd has given a buy. Trading in markets which are moving  up the wall of worry is difficult.I would suggest trading light and with proper risk management. Shorts as earlier cautioned would be harmful to health and finance till enough evidence of a continued fall.