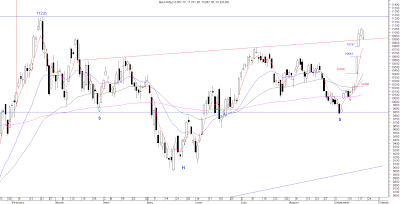 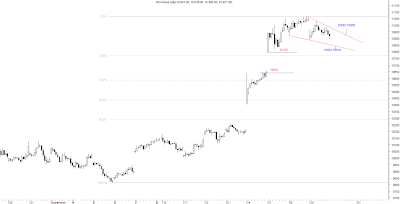 Daily charts show a shooting star which is a bearish candle pattern indicating a possible reversal.Oscillators have turned down from the overbought region which increases possibilities of a correction.

However bad news from the political front was not given much importance and the Bank Nifty continued to consolidate within a flag the gains  made with runaway gaps of 1250 points from 9814 to 11065., as shown on half hourly charts.

Till the gap support at 10642-10797 is held chances of the upmove resuming are high.Watch out for a breakout or breakdown from the flag for immediate direction.