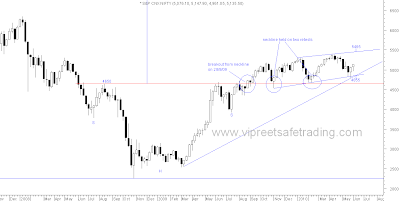 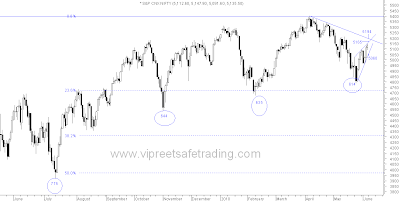 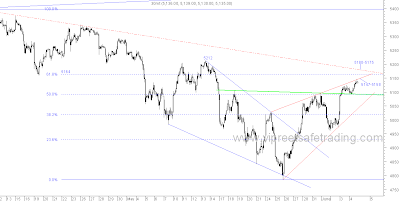 As anticipated in the weekly analysis of 31st May, Nifty moved up from the 'turning points' shown on the oscillators. The weekly bias has changed from down to up with a higher low higher high candle. Holding the trendline from November lows is another bullish indication. Time to visit  the Inverse Head and Shoulder pattern formed since June 2008 with it's neckline at 4650. Nifty has tested the neckline  twice since breakout in August 2009. This makes it a very strong support and one can be long for the long term till this neckline is violated.

Indications of bullishness are resurfacing. In the very short term the rising wedge and negative divergence may lead to a pullback . The fact that world markets are in a tailspin  alert  us to be more biased towards  risk management than earning profits. So trade properly hedged.

The  bias has turned  positive and one can trade long with a stop loss  of 4950.

tgt for break of rising wedge pattern on the 30 min chart?

Very interesting maam. I am wondering what you think short term - within a month timeframe. Because world cues are all for a big fall. Could we be going against that ? Maybe we are immune to world markets or are we so oversold recently.

thanks rani and k r menon
golf dude-- short term is around 2-3 weeks. Very short term is immediate trading day. I am analysis only on technicals. The "news" bit we need to keep in mind. that is why the hedging is necessary. The 775 etc is the number of point fall.

subbu84 the target could test the low of 4786 and lower. Also the inverted cup and handle I couldnt trace. I was refering to the cup and handle at the bottom