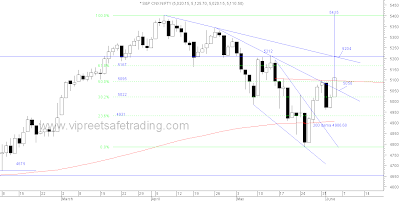 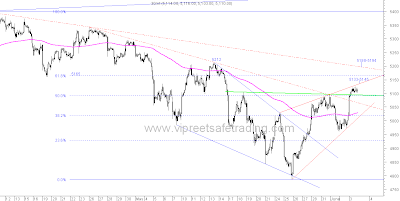 So the right shoulder of the inverse head and shoulder pattern formed and broke above the neckline to give a target of 5415.The falling wedge had earlier  given a target of 5380. (Refer to earlier posts). 5097 which was proving a difficult barrier has been crossed.Volumes were low but breadth positive.

Resistance at 5133-5145 from rising wedge , shown on half haourly charts, though, could not be crossed today . 5165 is the 61.8% retracement level of entire fall from 5400-4786. Thus the area of 5133 to 5165 will be very strong resistance.The downtrending line from highs of 5400 has resistance  at 5198-5194 and reisistance from the previous peak at 5212 will be the next barriers.Bulls need good momentum to scale these levels. Rsi14 and Macd are moving up in the neutral zone but stochastics is in sell having moved down from overbought zone.Minor negative divergence on Rsi 14 and macd on half hourly charts .These mixed signals may play spoilsport in the attempt to cross these barriers.

All emas on half hourly charts are bullishly aligned. The Nifty has once again closed above the 50dema.Bullish patterns with attractive targests have emerged. One can be cautiously long on the Nifty.

can you please tell if ther is an inv cup and handle pattern formed in daily charts..

Sorry did not reply earlier. What u are identifying as cup with handle has been identified by me as inverse head and shoulders. If you dont take into account the left shoulder then you have the cup with handle.The target is the same in both cases.

but inverted cup and handle is a bearish pattern and it gives tgt in the downside right? ard 600 points frn neckline at 4800

i am sorry..i think its lil more clear in weekly charts a inverted cup and handle paatern