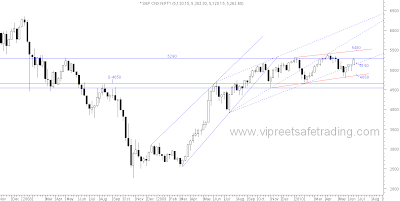 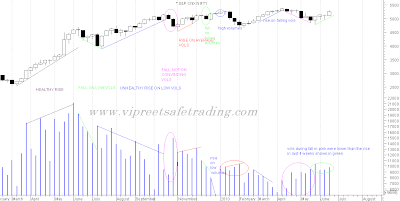 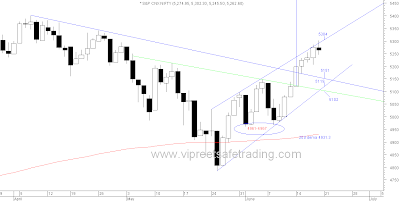 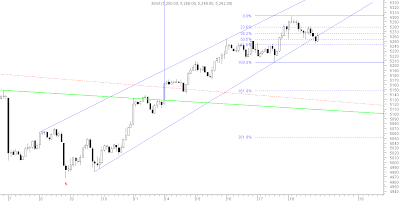 Big bull candle closing at the highs.Refer to my post on 31st May 2010 mentioning that oscillators have taken support at crucial levels which have been turning points. Oscillators are moving up in line with that and so is the Nifty. The trend is now clearly up as Nifty has also closed above 5240 for the week which was a necessity to scale the trendline on weekly line charts shown in my post for 14th June 2010.
Resistance at 5290-5480  and  Support at 5150-4967.

Nifty closed in the black for the first time in eight  days but maintained a higher high higher low. The upper trendline of the rising channel has been proving resistance for the last two days and the resistance is now at 5304. The rise being a wee bit sharp calls for some correction either down or sideways so that the steepness is corrected. The stochastics is in sell in the overbought region , while the Rsi14 and Macd are still moving up.
All emas continue to be bullishly aligned.

Half hourly charts show the correction mentioned in the analysis under Daily Chart already underway. The appearance of a shooting star in the second half hour today, set the downtrend which has broken the uptrendling channel .The resistance from this channel is at 5265.

The uptrend continues . The 5150-5200 is a very strong support region. The uptrend should continue till this support holds.