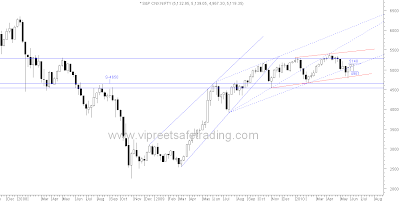 "Inside pattern" was formed on the weekly charts as the nifty failed to break last weeks range of 4961-5148 indicating  indecision.  Positive point to be noted is that Nifty,  remained below the trendline from July 2009 lows of 3918 on 21st may 2010, but  has been closing above it since the very next week on  28th May 2010.
Weekly Line Chart 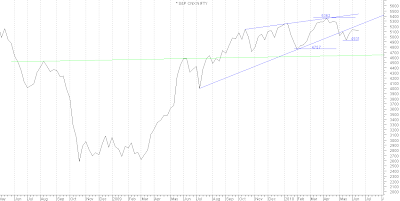 The weekly line chart however  clearly shows the break of the trendline from July 2009 lows continuing . The upmove from the low of 4931 shows low strength and the downmove continuing. The momentum will pick up only when the range of 5362 -  4757 is broken giving a 600 point move.

Amongst the weekly oscillators only stochastics is moving up. Rsi 14 shows waning strength though above the 50 mark and macd continues to make a lower tick.

A weekly close above 5240 , which would mean climbing above the uptrendline once again , would  set the nifty moving towards the upper range of 5362. 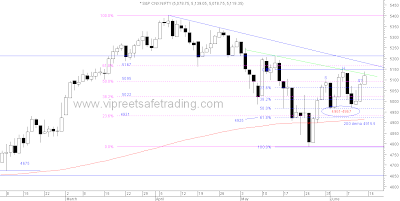 Daily Charts show resistance at the top of 5148 and the green neckline.Inability to cross it will lead to an attempt to break the solid support of 4967.Oscillators are moving in tandem with the nifty.OBV  though has made a new high, increasing possibilities of the Nifty continuing to move up.
Short term direction will be set by breaking 5148-5212 on the upside and 4961 on the downside. The medium term  is up so long as  the  neckline at 4650 of the inverse head and shoulder pattern is held.Refer to the post for 7th June for deatils.Line charts though depict bias towards weakness to sideways movement.The situation is fluid and one can easily get whipsawed.

Trade Long but positions should be adequately hedged till  the top of 5400 is decisively scaled.