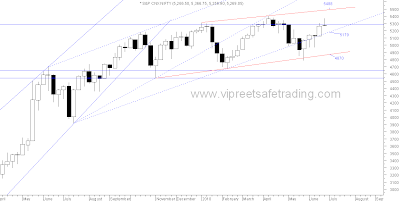 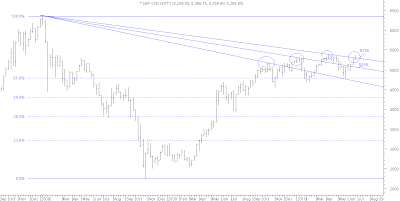 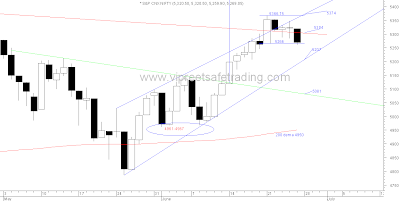 
Nifty has formed a shooting star which is highly bearish. The fact that the move past 5367 to scale the previous peak at 5399 made 2 months ago has been eluding , adds to the bearish possibilities. The stochastics is overbought, the Rsi 14 continues to make lower high and lower low since October 2009, Macd too has been in tandem with the Rsi 14 and is in a sell mode. Only a move above 5367 will nullify the bearishness.

Chart II shows the downtrendline from January  2010  joining highs made in the rally from March 2009, has been resistance at first but finally scaled to make new highs in the rally. The Nifty may thus correct some more only to finally scale the trendline.

The inside day range was broken on the downside but the close is still inside the range.The breakout from the uptrendling channel and the downtrending  line from January 2008 highs proved false . Oscillators and OBV have moved below immdediate trough made on 18th June . Nifty's corresponding low is at 5245.Possibility of breaking this low  is high.

Hello, I find your comments are identical in the blog : http://marketpulse-snp.blogspot.com/.

Are you same ..Please clarify. Thanks.

Are you same.. Please clarify. Thanks.

thanks fro making me aware. That is definitely not my blog. I am at a loss what to do with these copycats

I have never seen such an unbiased technical views, everyday its helping me.