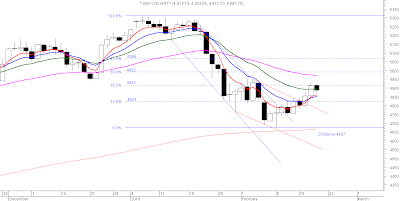 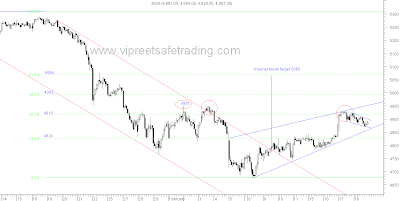 ""But 4951 is proving huge resistance and Nifty is being sold into even before reaching the level. Further bullishness only after crossing this level and closing above it""

The resistance proved strong and the Nifty corrected and was volatile in a small range on larger volumes than the previous two  days which were  bullish. This correction has been forming a bullish flag. Also formed an "Inside Day" as it stayed within yesterday's range..

Hi mam,Give a try to wolf wave theory.Not like EWT but i feel worthable.Vikas verma ,the link given in my blog WW ANALYST.regards-rajamani

thanks rajamani will look into it

Dear Madam,
I visit your blog on regular basis, its good to learn from your blog.
One favor I want madam, I use Metastock EoD as well as RT. I want to know about one good data provider for RT Charts compatible with Metastock.
If you know anybody pls give me details on below email address.
Regards
Amit Vora

amit, can you please put up this question on the forum? I am sure you will get a variety of answers to choose from

I am also looking for the same and I have Amibroker as my charting software. Here's one good link that I found so far. http://www.market-data-provider.com
I haven't subscribed to this service because I am an amateur trader and can't trade that freely from office. So far I am using RK Global Intraday/End of day charts for Futures market and Quotetracker for NSE Cash. RK Global charting is pathetic but good enough for my trading level for now.