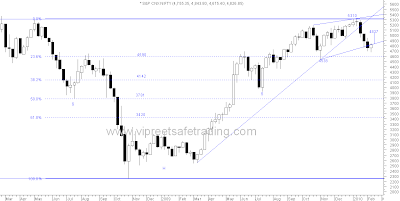 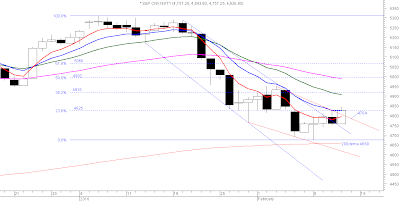 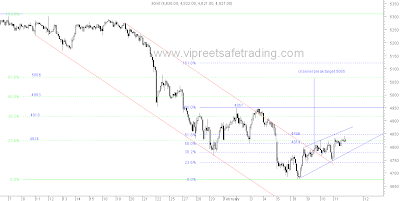 Nifty has broken out of the downtrending channel as shown on daily charts giving a target of 5065 which coincides with the 61.8% retracement  of the fall from 5310 to 4675. Nifty has  also  moved back into the channel broken last week as shown on weekly charts. Positive divergences on daily charts indicate the probability of the pullback /upmove continuing.These are bullish signs .
However negative divergences on the half hourly charts and the rise forming a  bear flag increase the possibility of a fall before the upmove from 4675 continues.Supports on the lower trendline of the flag for Monday is at 4777-4805.The upmove continues till these supports hold.
The Nifty has retraced less than 23.6% of the rise from March 2009 lows.Thus the probability of some more correction of this rise looms.The recovery from the low of 4675 has been on very low volumes .The broad trend is down so any counter trend trade should be properly hedged .