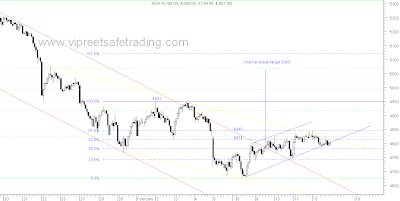 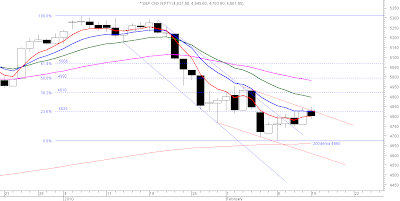 I mentioned yesterday , " However negative divergences on the half hourly charts and the rise forming a  bear flag increase the possibility of a fall before the upmove from 4675 continues".
As anticipated Nifty corrected today but it was a day of mild correction in a sideways movement on low volumes.  The upward moving channel shown on half hourly charts was broken but no momentum on the downside was seen. The day's candle   made a higher top and higher bottom. Positive divergences on daily charts are intact.The breakout from the down trendline from 5310 is also intact.
Nifty has resisted at the 23.6% retracement level at 4825 since last week making it an important resistance to cross for any further upside.Today Nifty hit the resistance of 61.8% fibo level of fall from 4951 at 4845. Thus only a close  past 4825 -4845 will keep the upmove going. Else the correction may resume.
Suppports at 4805-4780-4760-4740.